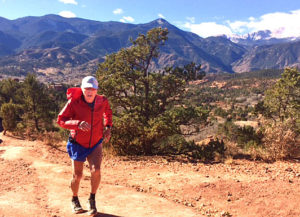 Bob loves running the Garden of the Gods’ hills.

Bob McAndrews, who turned 77 this past November, loves to run up mountains.

He has run up 14,115-foot Pikes Peak literally hundreds of times. Often he’ll hitch-hike down and some of the stories he tells about the tourists who drove him down would make your knees shake.

He’s run the Pikes Peak Marathon and Ascent 24 times, winning his age group 11 of those times. He has set a number of age group records, one of which still stands.

Bob ran up Mount Washington, one of the toughest climbing events in running, coming in second in his age group. After the age of 60 he posted age group wins on Pikes Peak, La Luz Ascent in Albuquerque, the Vail Hill Climb and Turquoise Lake in Leadville. He’s raced internationally and successfully competed with the world’s best mountain runners.

At 77 he continues to run local races often beating the winners in age groups much younger than him.

I’ve known Bob for a long time, ever since my second year in college. And, over the years we’ve shared many a trail and a few races along the way. During his fastest years I shied away from training with Bob (unless he was injured or recovering from some debilitating effort) because his pace and intensity would almost inevitably take me too far out of my body’s comfort zone, leading to injury, occasionally, or more commonly, exhaustion.

But these were small prices to pay for our long talks ranging from world events to the impact of culture on running performance to the latest odd-ball running regimen currently in vogue.

Sometimes our conversations veered to personal or business problems and Bob, with insight and compassion, was a ready listener and thoughtful adviser.

The only topic I studiously avoided was racing. From our very first runs I learned, painfully, that any mention of a past or future race would send our pace skyward and I would soon be in deep oxygen debt while Bob effortlessly continued his racing saga or strategy.

What has made Bob an inspiring friend, not only for me but for a host of local and regional runners, is that he’s a real runner. He’s not just someone who runs. He’s a student of the sport. He can talk intelligently and at length about atrial fibrillation, which has slowed him down, V02 max and what you need to do to increase your lactate threshold. He’s an expert on injury and recovering, which he does spectacularly well.

It’s a real privilege to bring you our conversation on many of these topics on the inaugural edition of The Age Stronger Show.

I hope you find it as enjoyable to listen to as it was to record.

Your comments and feedback are not only welcome and important but are vital in order to make the show better.

Please take a moment (it would be a huge help) and share what you liked most about the show and if you have some encouraging suggestions for improvement, I’d like to hear those too.

If you enjoy this episode, please take a moment and give it a rating on iTunes. I know this is a big ask but it really helps to get great guests. And it also makes the show more visible to others who might like to join us in aging stronger. Thanks in advance!

Below you’ll see an outline of some of the topics we covered and some of the resources mentioned.

History of running at the University of Colorado at Colorado Springs

Dealing with the loss of speed and competitiveness

As an older athlete dealing with injuries and illness

How Bob’s training has changed as he’s gotten older

The importance of speedwork.

The Pikes Peak Road Runner’s Winter Series, using it to get fit

The role of running in staying intellectually alive

The effect of having a physiological dependency on running

Peakus Interruptus, quitting at the top

Why he switched to Hoka running shoes

Why use so many different kinds of shoes, including Icebugs and Micro Spikes and how this may help avoid injury

Legacy as a runner

Bob’s running journals and how he uses them

The other dreaded “C” word

How you are your own experiment

Cross-training, strength training. How much he exercises per day

How he feels right now

Enough said. Time to get out for a run